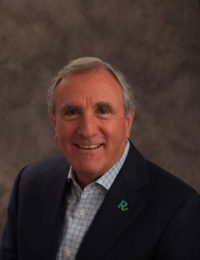 Mike Sangiacomo is President and Chief Executive Officer of Recology. Mike is responsible for overall strategic planning, resource development and growth, and leading Recology in its support of San Francisco’s recognition as the “greenest” major city in the nation.

In 1983, Mike was recruited to be the Chief Financial Officer of Sunset Scavenger’s parent company. In 1987, the company merged with Recology, and in 1988 Mike was made the Chief Financial Officer of the merged companies. He was promoted to the position of President and Chief Executive Officer in 1991. Mike has served as a member of the Recology Board of Directors since 1990.

Mike served as a board member of the San Francisco Chamber of Commerce from 1998 through 2004, and was Chair in 2002. He also has served as a member of the University of San Francisco School of Business and Management Advisory Council. In 2014, he joined the board of the California Historical Society, the official historical society of the State of California, and was elected its Vice President in 2015.

In 2008, Mike was honored as the city’s “sustainability leader” in the San Francisco Business Times’ annual celebration of San Francisco’s most admired CEOs. Mike earned a B.S. in Business Administration with an emphasis in accounting from the University of San Francisco. He is also a Certified Public Accountant in the state of California.