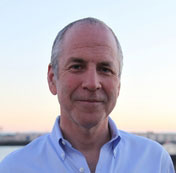 Marv is in his third career with ExtraFood. He first had a 20-year career in technology, initially in R&D, and then in Sales & Marketing, at such companies as Apple. He then became a licensed psychotherapist with a private practice in Marin and San Francisco, practicing for 14 years before devoting himself full-time to ExtraFood. Marv has a Master’s degree in Counseling Psychology from Dominican University, a Master’s degree in Computer Science from Stanford University, a Bachelor’s degree with High Honors in Computer Science from UC Berkeley, and is a graduate of the Stanford Executive Institute. He was one of five people in the SF Bay Area to receive the 2017 Silver Jefferson Award for Public Service, and also received the Pacific Sun’s 2014-15 Hero of Marin award for Innovation for his work leading ExtraFood. Marv is a member of the Marin Food Policy Council and the Executive Committee of Drawdown:Marin, has testified to the U.S. Congress’ National Commission on Hunger, was an invited attendee at Harvard University’s inaugural 2016 Food Recovery Entrepreneurs Workshop and was on the Steering Committee for Harvard’s Food Recovery Entrepreneurs Workshop and U.S. Food Waste Summit in 2018. He enjoys cycling, singing, and writing in his spare time.