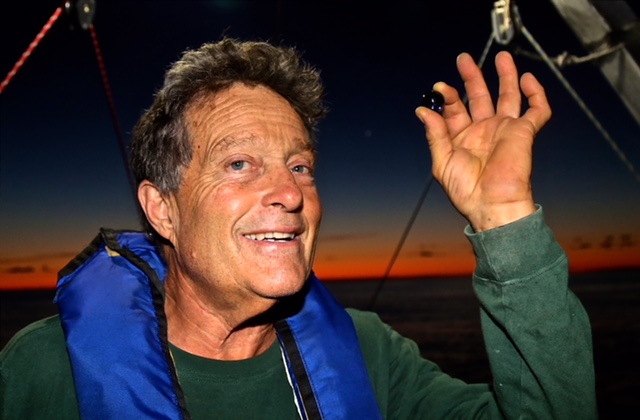 A third generation resident of Long Beach, California, Captain Charles Moore grew up in and on the Pacific Ocean. His father was a industrial chemist and avid sailor who took young Charles and his siblings sailing to remote destinations from Guadalupe Island to Hawaii. Charles attended Lowell Elementary, Rogers Junior High and Wilson High before attending the University of California at San Diego where he majored in Chemistry and Spanish. After 25 years running a woodworking and finishing business, he founded Algalita Marine Research Foundation and Long Beach Organic simultaneously in 1994, to deal with urban runoff through creating organic community gardens and reforesting the giant kelp off the southern California coast. In 1995 he launched his purpose designed, aluminum hulled research vessel, Alguita, in Hobart, Tasmania, and organized the Australian Government’s first “Coastcare” research voyage to document anthropogenic contamination of Australia’s east coast.
Oceanographic Research Vessel Alguita and its Captain found their true calling after a 1997 yacht race to Hawaii. On his return voyage, Captain Moore veered from the usual sea route and saw an ocean he had never known, “there were shampoo caps and soap bottles and plastic bags and fishing floats as far as I could see. Here I was in the middle of the ocean, and there was nowhere I could go to avoid the plastic.” His 1999 study shocked the scientific world when it found 6 times more plastic fragments by weight in the surface waters of the central Pacific than the associated zooplankton. His second paper found that plastic outweighs zooplankton by a factor of 2.5 in the surface waters of Southern California. Ever since, Captain Moore has dedicated his time and resources to understanding and remediating the ocean’s plastic load. He recently returned from 6 months at sea in the South Pacific surveying the extent of plastic contamination in the South Pacific Garbage Patch and along the coast of Chile.
His work has been featured on Good Morning America, Late Night with David Letterman, Nightline, the Colbert Report, Academy Award winner Jeremy Irons documentary “Trashed,” and the National Geographic special “Strange Days on Planet Earth.” In 2013 he received and honorary Doctorate from Thompson Rivers University in British Columbia and in 2014 he received the Peter Benchly “Hero of the Seas” award designed by Wyland at the California Academy of Sciences Museum of Natural History in San Francisco.
Captain Charles Moore’s book, Plastic Ocean: How a Sea Captain’s Chance Discovery Launched a Determined Quest to Save the Oceans, takes the reader through his initial voyage to the Gyre, his subsequent research expeditions prior to the 2014, fifteen year Great Pacific Garbage Patch expedition, which showed the radically upward trend in plastic contamination of the area, and his fierce game-changing work to engage the world in recognizing and taking action on the plastic invasiveness crisis in our oceans. This research prompted a massive global reassessment of plastic’s pervasive presence in the Gyre, raising profound questions regarding the implications of this new remote”habitat’. His hard-won credibility and dogged, game- changing efforts to get the world to pay attention to a looming ocean crisis have earned him world-wide respect for igniting world participation in The Plastic Pollution Conversation.